The following are summaries of leading Japanese American jazz performers (click on the artists names for music samples):

Hiroshima may be the most well known Asian American fusion jazz/smooth jazz rock band. The group was formed in 1974 by Dan Kuramoto (wind instruments and band leader), Peter Hata (guitar), June Kuramoto (koto), Johnny Mori (percussion and taiko), Dave Iwataki (keyboards) and Danny Yamamoto (drums). Named for the Japanese city of Hiroshima, the band is best known for the fusing of Japanese music and other forms of world music into its playing. Among the band’s many accomplishments– their popularity in the Asian and African American communities for R&B Funk sound, opening act for Miles Davis 1990 world tour, and their 1989 original score “The Moon is a Window to Heaven” used in “Star Trek V: The Final Frontier”.

Ryo Kawasaki (born February 25, 1947) chose a career as a jazz fusion guitarist after spending some years studying as a scientist. During the 60s he played with various Japanese jazz groups and also formed his own bands. In the early 70s he came to New York. Kawasaki is able to switch between hard bop and jazz-rock, and continues to play jazz guitar with an edgy rock influence.

Toshihiko Akiyoshi: Though born in Liaoyang, Manchuria of Japanese emigrants, Toshihiko Akiyoshi began her musical career in Japan. Akiyoshi and Tabackin (her husband) formed a 16-piece big band in 1973 composed of studio musicians a year after moving to Los Angeles. Akiyoshi’s music is distinctive for its textures and for its Japanese influence. Akiyoshi was inspired by her own Japanese musical heritage and composed with Japanese themes, Japanese harmonies, and even Japanese instruments (e.g. kotsuzumi, kakko, utai, tsugaru shamisen, etc.), all the while remaining rooted in jazz.

Gerald Oshita (1942–1992) was an American musician of Japanese ancestry who lived in the San Francisco Bay Area and specialized in wind instruments, particularly those rare ones of low register. He performed and recorded with saxophones, contrabass sarrusophone, and Conn-o-sax, and also made shakuhachi (Japanese bamboo flutes). Oshita’s music drew on elements of jazz as well as contemporary classical music.

Glenn Horiuchi (February 27, 1955 – June 3, 2000) was an American jazz pianist, composer, and shamisen player. He was a central figure in the development of the Asian American jazz movement, according to Wikipedia. Glenn Horiuchi was a West Coast pianist who worked to combine jazz with Asian and Western classical music. He released albums on the 80s and 90s such as Soul Note and Asian Improv.

Anthony Brown, the son of a Choctaw and African-American father and Japanese mother, is an American jazz percussionist, drummer, composer, and bandleader. He specialized in American and Asian instruments and styles in his compositions and arrangements. Brown lead a cross-cultural ensemble, the Asian American Orchestra, whose interpretation of Duke Ellington’s Far East Suite was nominated for a 2000 Grammy Award. He also performed with Asian American jazz artists Jon Jang and Mark Izu.

A particular japanese cedar tree, sugi, is the national tree of Japan. Cryptomeria, also known as Japanese Cedar, was originally more function than form, but certain varieties have come to attract gardeners for its ornamental beauty. Though not related to cedars, it is in fact a bald cypress, they had been similarly exploited as a timber / lumber tree in Japan. However, their true lasting value may be in that they possess a wide variety of sizes, shapes, habitats, and textures. There are over 100 varieties, ranging from 6-80 feet in height.

As a timber source, the wood is a stunning pinkish to red in color, is a hard wood and is particularly resistant to decay. It is also used in bonsai as well as standard Japanese gardens for its draping, almost cascading needle branches, accenting a nicely designed garden (see image below).

The famous Jomon Sugi located on Yaku shima Island, Japan, is one of the world’s oldest living plants. It is estimated to be nearly 2,200 to 7,000 years old.

The anime story about “The Charcoal Feather Federation” (Haibane Renmei) sends a deep spiritual message. The setting of the story resides in the idea of a purgatory type of state for lack of a better term (although this does not necessarily reflect the intent of the author nor is it wholly representative of the true translation).

This state is more psycho-social spiritual than an actual physical place or state that are often associated with western ideas of purgatory. The mindset of the main characters are all about relationship, giving and receiving, and letting go of the thinking that holds us back from attaining a place of spiritual freedom- freedom from the trappings of our mind’s thinking, such as self blame and guilt, and lack of self- forgiveness.

This is what makes the Haibane Renmei a must see. Every one of us has a place or part of our life- story and life- thinking that we struggle to come to terms with; we struggle to forgive. It comes in a form we may have long buried and forgotten. If we find ourselves being dismissive when reading this, we most absolutely have something we imperatively must find, face, and forgive.

The first step is to find it and face it. Haibane Renmei emphasizes the important messages we may gather from our dreams and memories. Then, having found and faced it, can we muster the courage to forgive?

This is the ultimate aim of a spiritual life, and I argue each of our lives. If we have not forgiven our self, we are not able to forgive the same in others. Thus, that part of us is projected out; becomes a cancerous toxic presence in our own life, and therefore among our circle of friends and family. The creator of Haibane Renmei, Yoshitoshi Abe, has a gifted way of bringing the spiritual life, including the progression into the next life, as interwoven with the life of here and now, a notion very appropriate for the Shinto tradition. However, it presents the current life we lead and the progression through spirituality into the next life, in terms foreign to western concepts of life and death. These are Shinto- Buddhist concepts, though Abe-san handles it masterfully.

Once we have forgiven the self, we free our self from our own mental trap and become empowered with the capacity to forgive. Often the “forgive process” comes from someone else, as was the case with Reki in the Haibane Renmei story, the girl who could not remember her dream, nor forgive her self. The story suggests a need for a loving catalyst, a loving person in one’s life who reaches and makes the “forgiveness connection”. I’ve needed more than one person to help me make my “forgiveness connections”.

That is the means by which we obtain freedom to reach a higher spiritual presence in this life and the next.

Though there are dozens of varieties of grasses that originate from Japan, there are three primary types of Japanese ornamental grasses. These are – Hakone grasses (also known as Golden forest grass), Silver grasses, and blood grasses.

Hakone Grass:
The golden forest grass can be a bright clump of cascading yellow grasses, or it might be a more light green shade if less exposed to the sun. These are ideal foreground accents for your garden as they remain fairly low to the ground.

Silver Grass:
Silver grasses are more appropriate for mid- to back- ground locations in your garden. They likewise grow in clumps, but much taller to 3-4 feet in height. Their stalks flower feathery seeds ranging in color from pinkish red to light cream or silver.

Blood Grass:
The popular Japanese blood grass gets its name from spiky red tips of these rare ornamental grasses, creating the image of grass on fire. These don’t grow in clumps like the others, but can spread to cover fairly large areas.

StiltGrass:
A fourth grass type worth noting that is not part of the above three primary grass groups, is the stiltgrass. Japanese stiltgrass, has the appearance of mini bamboo, green and growing low to the ground as a ground cover. Like bamboo, it can be invasive.

There are a number of other grass types commonly used in Japanese gardens that fall between the grass and moss categories that are commonly used as nice area ground covers. 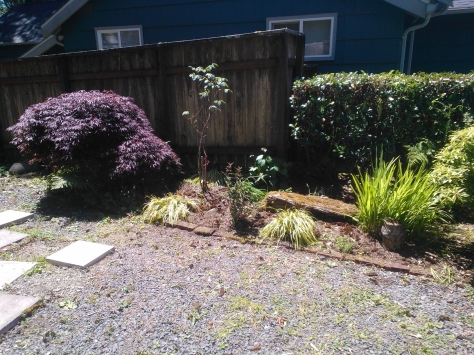 You can listen to samples of Eugene’s music at Jazz Koto of Eugene Yamamoto, by Accardi/Gold and Union Label Music / Cloister Recordings.

His music is a frivolously fun style, even using the traditional Koto instrument in a new and unique way with adventurous, rhythmic plucking. He does this with a steady western style beat, which differentiates it from Koto Jazz tunes and traditional Japanese koto music. The rhythm and beat is definitively western, while some songs are interwoven with Asian and Japanese style melodies and chordal structures. These distinctions can be heard clearly as you listen to “Walk in the Garden” and “Samurai Dream Vacation“.

In “Saki Train” and “Martian Tea House” it seems he uses the Japanese koto instrument and sound with a funky, electronica sound.

Kudos to Eugene for his take on Jazz Koto and definitely worth a listen.